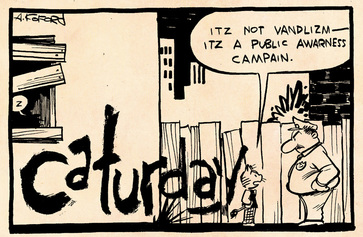 "Laugh-Out-Loud Cats #1065" by Flicker User Ape Lad
Multilingualism, in our country, acts as a double edged sword. One side develops an individual while the other side creates social stigma. Suhanthie Motha argues that English as a Second Language (ESL) teachers need to increase their “deliberate consciousness” (Motha, 9) within the classroom, and during interactions with their students in order to overcome racial inequality. However, I argue that we need to make classrooms more inclusive environments by accounting for all students together rather than focusing on awareness of individuals. As a result, instead of concentrating on seeking “deeper insight into a teachers’ struggle” (Motha, 12) on race complexities in relation to language and power, we should focus on changing the way in which the teaching system is set up. Hence, I insist that by integrating ESL students into regular classrooms, whilst having an ESL teacher present as a resource, ESL students will be less ostracized from their peers and the stigma surrounding them will be significantly reduced.

"Intergration" by Flicker User Sean MacEntee (click on image for direct link)
Motha touches upon colonialism and neoliberalism as one of the problems perpetuating segregation, assimilation, and the cultural disconnect between native and non-native students. She speaks of improving ESL/ESOL teachers’ awareness on the racial issues that students face, but I argue that mere awareness is not enough to combat these racial problems; the stigma about ESL students still persist. She also states that this disconnect is not only persistent between native and non-native students, but also between teachers and students; therefore she prompts educators to establish “more-effective ways of talking about race” (Motha, 3). By integrating the second language speakers into regular classrooms, the teachers build their confidence and in the process, language barriers are gradually broken. For instance, in Motoko Kainose’s reflection on his experiences in the Western educational system, he highlights some of the problems ESL students face when educators stop at just “thinking about race and coloniality in ways that are complex, constructive, and practical” (Motha, 2). Kainose’s experience in her class where the professor seemed to be trying to be considerate by allowing the ESL students not “to worry about [their] grammar” (Kainose, 111) brought upon her a sense of uncertainty. She felt that her ability to succeed was low in a class that held her standards below others in regards to their work performance. Consequently, I suggest that in this instant that the professor was aware that his students were experiencing difficulty and his idea of helping them was by alleviating, what he thought, were some burdens that they may face. By doing so he disregarded their work ability and made an assumption that most ESL students feel-that their words hold no power. Motha’s form of awareness best ascribes a way to tackle the burden which ESOL students face, and that is by either being a little more considerate towards non-native speakers or giving them leeway in regards to their work. However, sometimes this form of awareness perpetuates some of the stigma that ESL students face about their lack of competence towards a particular subject. Motha’s plan falls short of benefiting the educational system because it does not provide a solution that encompasses more than just ESL students and teachers. Her course of action does not implement a solution that is tangible for an educational system to follow to relieve non-native students of the social stigmas they face. 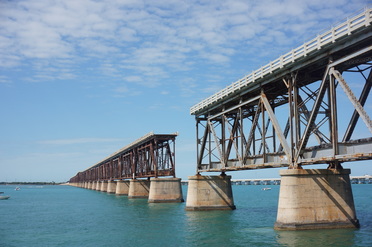 "Broken bridge 1" by Flicker User novellino09 (click on image for direct link)
Our educational system promotes collaborative work and an inclusive space for children to learn. However, collaboration happens only if a group has a common ground. In Motha’s introduction their common ground is that they are ESL teachers who are teaching English to non-native speakers. I believe that there is a need of furthering Motha’s plan of establishing consciousness of racial and social problems among faculty; we need to then take a form of action that will implement a way to combat systematic racism, and promote cultural awareness. Therefore, I suggest the implementation of integrating ESL into modern curriculum systems.  This way social awareness will be ingrained in individuals at a younger age, hence prompting an active form of awareness rather than a passive one. Clementina Nyarko, my interviewee, spoke to the fact that she felt that “a lot of people did look down on me, they thought I was slow and not as smart as the other students” (Nyarko, 2015). Nyarko expressed her need to prove those around her wrong about their conception of ESL students, so she would work twice as harder than others around her to prove that she was competent. Nyarko and Kainose both show parallels in their need of a sense of belonging and their consistent strive to prove understanding of the material being taught. Motha promotes awareness, links colonialism to the disconnect between ESL teachers and students. She does not promote bilingual education. Motha states her purpose for her book throughout her introduction, however none of them are geared towards an action that is effective for combating the racial issues in which she speaks about; instead she seeks only to “privilege  teachers’ knowledge” (Motha, 11). I propose that through an integrated school system, the numerous stigma, as Nyarko describes in her interview, associated with ESOL students would diminish overtime. However, I argue that we must first overcome the ways in which English is promoted and used that pushes it to represent an “attractive…desirable [,] and promising” rescue from poverty, sorrow, and unhappiness. Hence, due to this consistent idealization of the English language, individuals portray English as the only true way to communicate with other individuals. As a result there is stigma attached to those who do not or cannot speak English.  Through a more inclusive education, students who are not native to the land will gain confidence in their form of English and not question if their “idea [is] important enough to be raised” (Kainose, 114). This form of integration mimics some form of integration in the past. For instance, racial integration was a way to establish an equal form of education while also exposing culture and creating diversity. Another form of integration which contributed to equality in attitude in the educational system was the immersion of disabled students into regular classrooms. Racial and disability separation are key examples which we can refer to because these two categories had to be integrated in existing education systems. 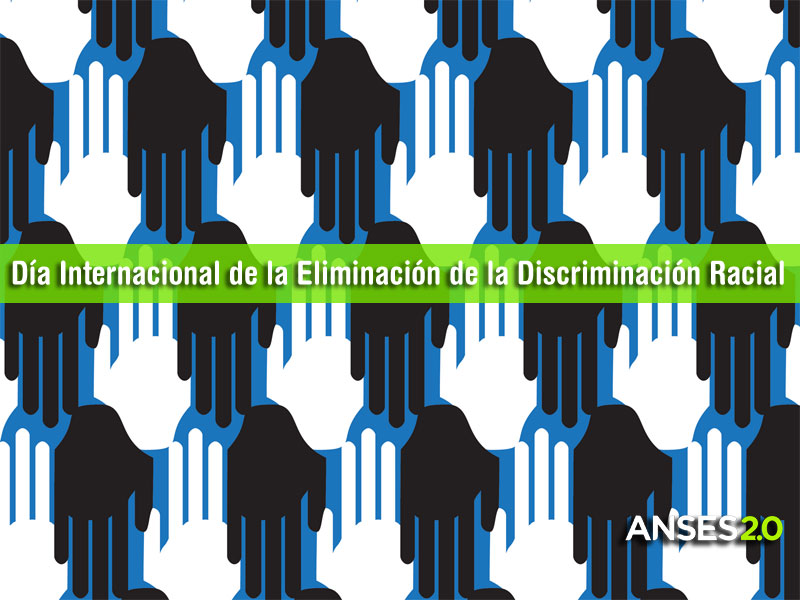 "21 de marzo: Día Internacional de la Eliminación de la Discriminación Racial" by Flicker User Administración Nacional de la Seguridad Social (click on the image for direct link)
In addition to integration of ESL students in today’s modern curriculum, to better facilitate this new environment for both native and non-native students, I suggest that ESL teachers and non-ESL teachers should collaborate with one another and co-teach these classes. During elementary school there is usually a teacher for all four core subjects –science, math, social studies, and grammar –and because of this it would be realistic to have each teacher who had an ESL student co-teach with an ESL teacher. Motha’s audience are ESL teachers, however I argue that this target area should encompass all teachers because ESL teachers are not the only individuals who interact with non-native speakers. I suggest that there is a disconnect within faculty members in an educational system because there is lack of communication between educators who are supposed to foster a healthy environment for ESL students. I propose that bridging this gap may also disperse the social stigma that ESL students have to face from native speakers. Motha proposes that “the teaching of English has metamorphosed…to become quite a different, more complex process” (Motha, 13), however I suggest that the teaching of English has not yet reached its full complexity. There are improvements that need to be made beyond an individual’s consciousness that establishes a more inclusive environment for ESL students. 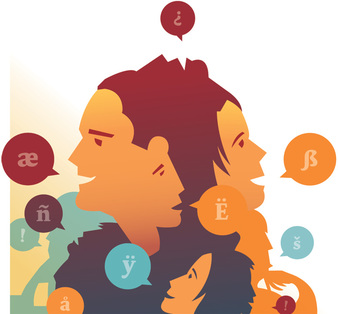 "Language diversity" by Flicker User Tobias Mikkelsen (click on image for direct link)
The way in which English Only standards is subtly promoted has also contributed towards stigma surrounding non-native languages. For instance, Richardson states that Congress passed a law to “uniform [the] English language…[so that] all laws, public proceedings, regulations, publications, [and] orders…” (Richardson, 98). This promotion of English as the only form of communication puts English on a pedestal, while simultaneously disregarding other languages as inferior. Elaine Richardson suggests that in order to combat this cultural inequality we need to “discard the center-periphery … if we are serious about equality” (Richardson, 109), however, I argue that in order to discard this way of teaching we must first have a system that embraces inclusion of both ESL and native speakers so we can have a concrete way for multilingualism to enrich all student experiences. However, having every language taught at a school is not feasible, but having students of different cultural background interact with one another can foster a different type of learning that helps students who are native speakers acquire cultural knowledge and understanding of non-native speakers. I propose that this system would also disregard assumptions that are usually put upon non-native speakers, and also supplement a more conducive way of thinking of other cultures. As Clementina Nyarko expressed, her parents were usually regarded as incompetent because of the way they spoke; thus I argue that language reiterates hierarchical divide in both our everyday lifestyle and also in our educational system. 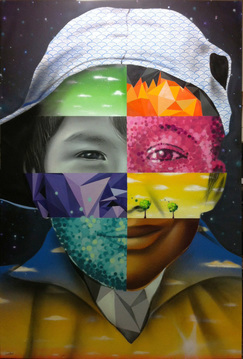 "Dasic Fernández Follow" by Flicker User Dasic Fernández (click on image for direct link)
All things considered, through my understanding of Motha’s introduction I conclude that integrating ESL and native speaking students can be a step further than the awareness in which Motha suggests throughout her essay.  I have discussed the ways in which we could build upon Motha’s need to propose awareness for ESL teachers, however, in the future having a model of an integrated classroom would help set the foundation for change in the educational system. Furthermore, coming up with different lesson plans that encompass all students in these integrated classrooms would also be a way to test if there can be an inclusive learning environment for nonnative and native students. Exploring these new ways to construct a more action based form of cultural awareness in the educational system can establish a proxy for a constructive form of education.

Image attributions in order of apparance